advtrains organizes LuaATC components into so-called environments. An environment represents a single automation system that has own global variables and function definitions. Components from different environments can only communicate with each other through interrupt_pos().

This concept allows different automation systems to coexist without interfering with each other.

Creating environments is done through a chat command:

You should choose a name that consists only of letters, numbers and/or the underscore character.

Once created, components can be set up by selecting this environment from the dropdown in the formspec, and Initialization Code can be specified.

There are 3 types of variable scopes in LuaATC applications:

The S table serves as persistent global value storage. Any data saved in this table is preserved across game restarts, as long as it is not of type function.

The contents of the F table are not persistent. They are reset when the game is restarted.

The F table is supposed to be populated by the Initialization Code, and hold:

The initialization code is code that is run at every game startup. Because functions can not be saved to disk, this code is used to set up commonly used function definitions for an environment, and populate the F table.

The initialization code editor can be summoned by the chat command: 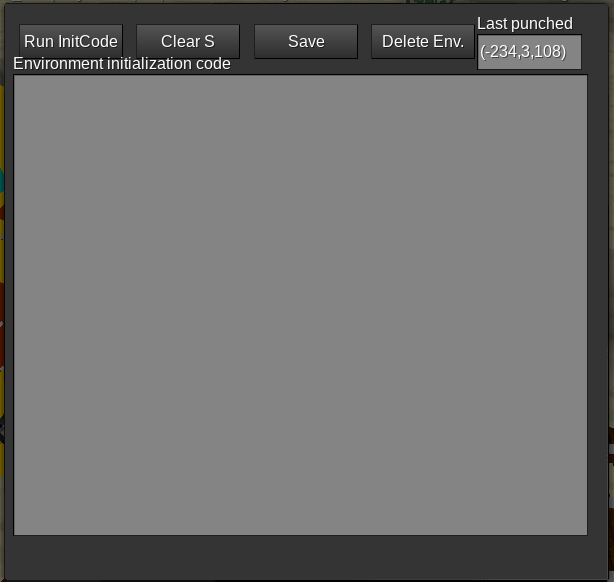 The buttons on the top row can be used to save the changes, re-run the init code and to delete the environment. The text field on the top-right can be used to copy-paste the position that was last punched by you. (with the introduction of Passive Component Naming, this facility had become obsolete)

Whenever you made changes to the init code, it is desirable to re-run it. Note that re-running the init code clears the F table first.

Until version 2.3.0, any errors or print() outputs were printed to all players in the server chat. This has changed to reduce chat spam on public servers. Players have to explicitly subscribe to the environments they are interested in. To do this, the following commands are used:

When creating an environment using /env_create, you are automatically subscribed to it.