The Track Circuit Break (TCB for short) is a key item in the interlocking system. It is analogous to real railway interlocking equipment, where track circuits are used to detect the presence of trains in a block.

A TCB must be assigned to a specific node of rail in the game world. After placing the TCB, right-click on it and then punch the rail you wish to assign it to. The specific track to which a TCB is assigned is not necessarily related to where it is located in the game world.

A TCB divides the tracks on both sides of itself into different interlocked sections. When the TCB is created, it does not belong to any sections. After assigning the TCB, it can then be added to sections or used to create new sections where none exist. You do not have to apply interlocked sections to all of your track: Since TCBs do not have to be assigned to sections, the default is to show that the end of interlocking occurs on sides with no section.

Once you have assigned a TCB, you can right-click and open its formspec. From there you can create interlocked sections on either side. 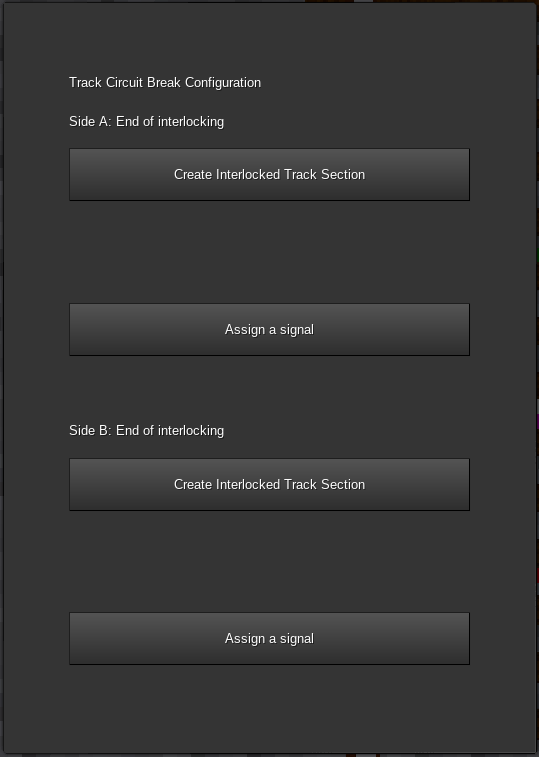 When you open a TCB, a doodad appears in the game world that indicates which side is which on the TCB. A red A indicates side A and a green B indicates side B, with a white and magenta stripe in between them. When you look directly at this doodad, hover text appears in the minetest UI which tells you the name of the section that applies to either side. 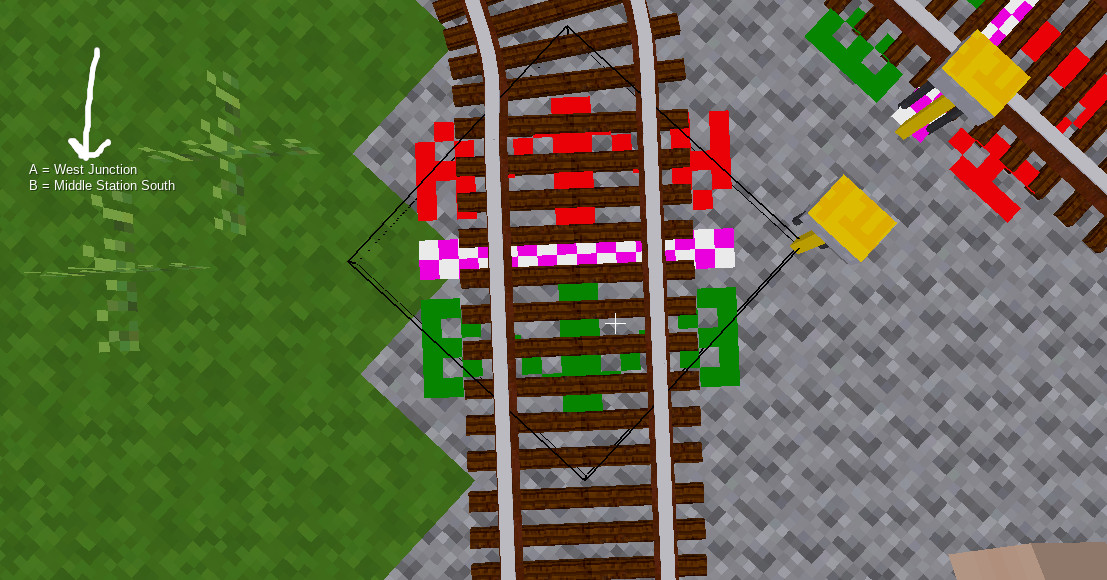 Once a section is created, you can assign a signal to a track section. You should place signals so they face the section that they will allow trains to enter (the section to which they will be assigned). 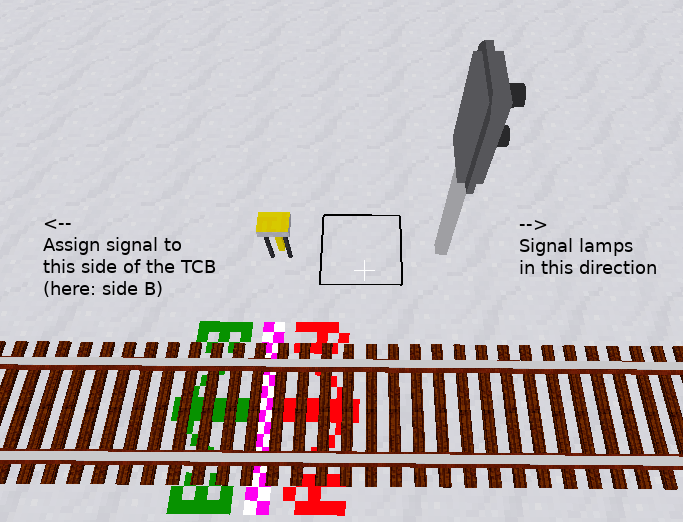 This is what a formspec looks like on a TCB with a signal assigned to one side and a track section without a signal on the other side. 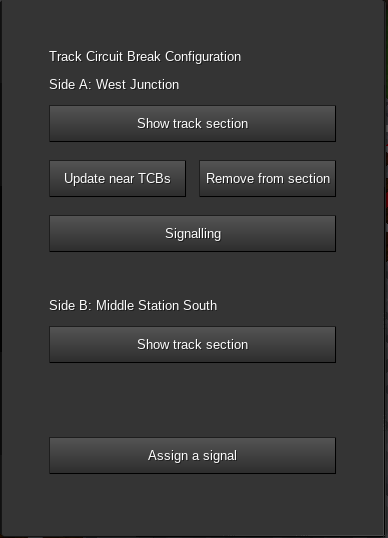 This button will open another formspec that shows information about sections. The section formspec lets you edit the section name. It is recommended to set meaningful section names instead of the generated numbers that advtrains produces. 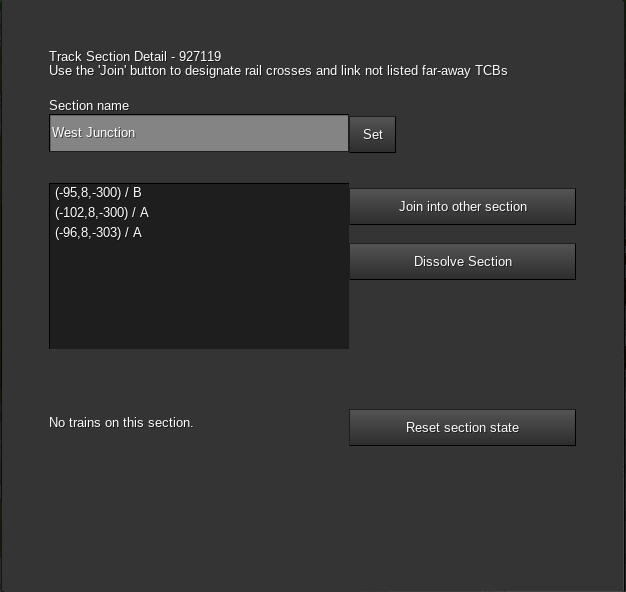 The section formspec shows all of the TCBs in the section at their coordinates along with which side of the TCB is assigned to the section. In case you are debugging your interlocking setup you may wish to visit each of these locations and check that they are TCBs that correctly belong in that section and are on the appropriate side. 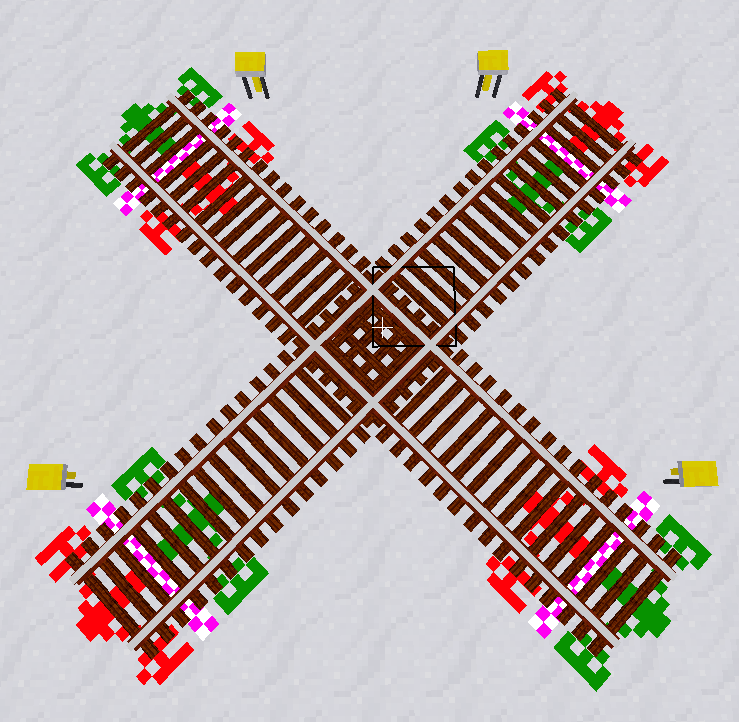 This rail cross can be made into one section by opening one of the sections, starting the join and then finishing it on another section:

Finally, you can dissolve sections from this formspec. This may be helpful to do in the event that your section becomes invalid, especially since it is often easier than visiting each of the TCBs in the section to remove the inappropriate ones.

This button will add any sides of TCBs that are not assigned to the interlocked section to the section of the TCB you have open. For example, if you add a switch with a TCB inside one of your current sections, you can either activate the Create Interlocked Track Section button on that new TCB or Update near TCBs on one of the existing TCBs in the section.

This option will not remove any TCBs from a section, including that may not be appropriate in a section, such as if you broke up a section into smaller sections. In that case, the safest thing to do is to dissolve the section.

This button will remove the TCB from the section. Use this when it does not belong to that section or when you remove tracks.

A signal that is assigned to a section on a TCB will have all of its routes start at that section on that TCB. For information on signalling, see this detailed wiki page.